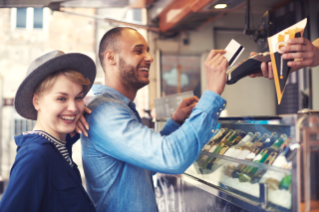 After three straight quarters of losses for stocks through the end of September, equity markets rebounded in October as the S&P 500 finished the month up 8%. Economic data hinting at slowing inflation raised investors’ hopes that the Fed will ease its aggressive rate hike policy. On the earnings front, companies had been rolling out mixed third-quarter results. Big Tech companies, including Microsoft, Google and Meta, reported
disappointing revenue, but energy conglomerates such as Exxon Mobil and Chevron counteracted by beating Wall Street estimates. Elsewhere, the Hang Seng Index saw its worst month since 2008 with a more than 14% loss in October, as Xi Jinping embarked on a precedent-breaking third term as head of the Communist Party.

Canada’s benchmark S&P/TSX Composite Index was 5.3% higher in October, as nine of the benchmark’s underlying sectors were positive during the month. The gain was led by the energy and information technology sectors with 13.8% and 10.8% returns, respectively. Utilities and materials were the detracting sectors during the period, with losses of 2.6% and 0.7%, respectively. Small-cap stocks, as measured by the S&P/TSX Small Cap Index, rose 3.6% for the month.

The U.S. dollar depreciated 1.5% versus the loonie during the month, slightly dampening the returns of foreign markets from a Canadian investor’s standpoint. Note that all returns in this paragraph are in CAD terms. U.S.- based stocks, as measured by the S&P 500 Index, gained 6.8% in October. The gain was led by the energy and industrials sectors, with respective returns of 23.5% and 12.7%. International stocks, as measured by the FTSE Developed ex US Index, rose 4.3% in the period, while emerging markets fell 4.7%.

Turning to commodities, the price of a barrel of crude oil rose 8.9% during the month, while natural gas declined 6.1%. Copper and gold had a negative month, with respective losses of 1.1% and 1.3%, while silver gained 0.4%.

Inflation in Canada remained elevated but slowed to a 6.9% year-over-year rise in September. The month-over-month drop in September was largely driven by lower gasoline prices, which fell 7.4% from a month ago. The Canadian economy added 21,000 jobs in September, and the nation’s unemployment rate fell to 5.2%. The Bank of Canada announced a smaller-than-expected interest rate hike of 50 basis points, marking the sixth consecutive rate hike by the central bank this year.

U.S. nonfarm payrolls increased by 263,000 in September and the unemployment rate improved to 3.5%. The consumer price index eased to 8.2% year-over-year. The slowing inflation rate was due in large part to a 4.7% decline in gas prices from a month ago. U.S. retail sales were unchanged in September. The Fed is expected to go for its fourth consecutive 75 basis point interest rate hike in the November policy meeting.

With so much focus on inflation, rate hikes and the labour market, the state of the U.S. economy will be a key factor for American voters when they head to the polls for the midterm elections on November 8. The environment for investors so far this year has been extremely challenging, but there is one favourable historical trend for stocks. Since 1950, there have been 18 midterm election cycles, and in the 12 months following each of those cycles, the S&P 500 was up every single time, with an average gain of 16%. Combine a midterm year with a situation where stocks are down more than 20% on a YTD basis leading up to the election, and the average subsequent one-year return was a more impressive 22%. Through the end of October of this year, the S&P 500’s loss was a shade under 20%. While we certainly are dealing with a small sample size, the fact that the 2022 midterms are upon us with stocks down a bundle this year suggests that returns over the next 12 months have a chance to be quite favourable.